Why are millions of small-scale commodity growers around the world experiencing crushing poverty, yet growing the essential crops for multi-million pound industries, such as cocoa for the global chocolate industry?

Powerful business interests in the North control the market for the benefit of their shareholders at the expense of the people at the other end of the trading chain.

Our aim is to alleviate the poverty of small-scale producers in the South by amplifying their voices in the supply chain so that they themselves can challenge and change consumer behaviour and industry practice.

In particular we seek to connect producers and consumers in a popular and accessible way through education and campaigns.

The ‘Pa Pa Paa’ education pack was developed by Comic Relief and Divine Chocolate and launched in 2000. It aimed to build Fairtrade understanding and consumer citizenship amongst young people by telling the bean to bar story of Fairtrade chocolate and Kuapa Kokoo.

In tandem with this education programme, Divine Chocolate and Comic Relief co-launched the first ever Fairtrade product designed especially for young people, the Dubble Fairtrade chocolate bar “with added Comic Relief”. Dubble was always more than just a chocolate bar: it also boasted a community of young Fairtrade campaigners called ‘Dubble Agents’ on the Dubble website, hungry to change the world chunk by chunk.

In 2006, Trading Visions and Comic Relief ran the ‘Cocoa Summits’ in the UK and Ghana. Raphael Agyapong and Issac Owusu, the children of Kuapa Kokoo farmers, led a delegation of UK children to deliver the Chocolate Challenge Manifesto, containing the views of over 400 school children, to Hilary Benn MP, then Minister for International Development

In 2007, Trading Visions ran an interactive exhibition on the bean to bar story of Fairtrade chocolate at the Eden Project in Cornwall, gathering another 9,000 signatures for the Chocolate Challenge Manifesto.

In 2008, Stephen Amankwah and Joycelyn Segbedzi, children of Kuapa Kokoo farmers, toured and blogged their way around the UK, speaking about the benefits of Fairtrade to three Fairtrade Schools conferences and to local shopkeepers and schools in Glasgow, Garstang, Haworth, Birmingham and London 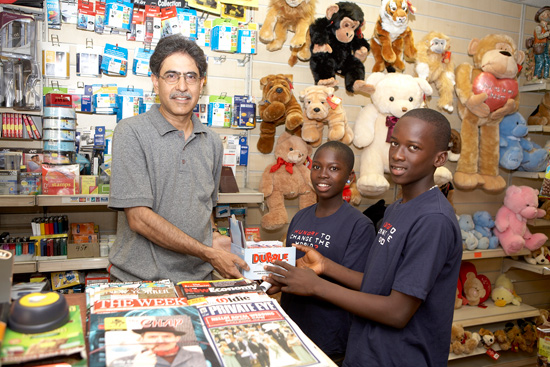 The foundation of all our Fairtrade education work in the UK is a long standing programme of educational capacity building in Ghana, which the partners in this project have facilitated since 2000. This includes funding a full time member of staff in Ghana to work with a range of Kuapa Kokoo supported schools and students.

The schools in Ghana that we work with struggle to maintain high educational standards because they serve poor, rural cocoa-growing communities. The schools are remote, with few facilities like electricity or running water, so it is difficult to find and retain teachers. Although primary school education is free in Ghana, families still have to buy uniforms and school materials such as pens, pencils, books and chalk.

The Kuapa Kids Community Project has delivered extra classes and materials to the schools. Activities like the Kuapa Kids Camps bring children together for three days – many of them leaving their villages for the first time and mixing with children from other schools – to learn about Fairtrade, the global chocolate supply chain, and issues such as nutrition, health and girls' education.

These activities have also supported Fairtrade education and awareness raising in the UK, with young people from Ghana coming over to speak to young people in the UK, or connecting through online video conferencing.

Make a donation to the Kuapa Kids Community Project

Trading Visions aims to amplify the voices of small scale producers and stimulate debate around solutions that put real power in the hands of farmers and workers in poor countries.

We are a member of the Trade Justice Movement which campaigns for the rules of global trade to put the long term needs of people and the planet before short term profits.

We support the fair trade movement, a global partnership between consumers in rich countries and producers in poor countries.

Fairtrade is a vibrant growing project to redefine global trade structures on the basis of equity, transparency and sustainable development. Though it is a very small part of the whole global economy, Fairtrade represents something much bigger, a working practical model for an international trade system based on justice and fairness.

We are inspired by the 100% Fairtrade companies like Divine Chocolate, Liberation Nuts, and CaféDirect , which not only pay a Fairtrade price for their respective commodities but are also part-owned by the farmers themselves, who sit on the boards and share in the profits of the companies.

These brands were all set up with the help of Twin Trading, a producer-owned membership organisation dedicated to developing fair trade supply chains for coffee, nuts, cocoa, sugar and fruit farmers. Twin Trading was founded in 1985 as the ‘Third World Information Network’ by the Greater London Council and started by linking London-based cooperatives with cooperatives based in the South. Twin works to develop new businesses that secure greater value from global supply chains for small scale producers, by bringing producers as close to consumers as possible.

Paying the price of chocolate: Breaking cocoa farming's cycle of poverty
Confectionery News article discussing whether raising retail prices for chocolate could incentivise cocoa farmers to invest in farms, bring them out of poverty and keep the next generation growing cocoa.

END_OF_DOCUMENT_TOKEN_TO_BE_REPLACED

Bring Fairtrade to life in your classroom with Pa Pa Paa LIVE! webcasts from a rural school in Ghana attended by Kuapa Kokoo farmers' children.